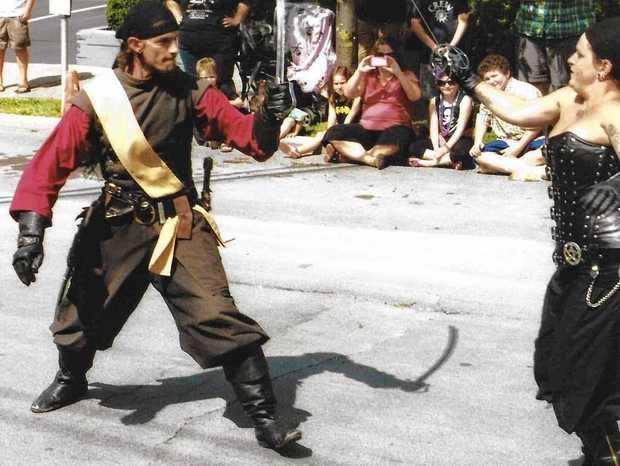 During 10 days in August, the Alexandria Bay Chamber of Commerce presents "Bill Johnstons Pirate Days." Visitors are invited to dress like pirates and a sword-fighting group performs in the village and along Route 12. This is just one of many activities planned during the 10 days. (Photo courtesy of Alexandria Bay)

For 10 days in August, Alexandria Bay turns back to clock to the 1830s for "Bill Johnston's Pirate Days." Bill Johnston became a renegade, hunted by Canadian and Americans, during the Patriot War. His infamous deed was burning the British steamer "Sir Robert Peel." Nowadays, this is an excuse for everyone to act and dress the part of pirates and patriots. At some point, a pirate ship will attack the village from the St. Lawrence River. Canons will be fired. The mayor will surrender and everyone becomes a pirate.

This year's event will take place from August 7-16.

A sword-fighting group, known as "Tales from Remikreh," performs in the village and along Route 12. An invasion and capture of a scouting party are staged for participants and spectators. A children's parade and grand parade and concert are on the schedule. A night time block dance with live music also is planned.

Most events are free.